Situated in the historic boundaries of Cheshire, Altrincham lies 8 miles to the southwest of Manchester City Centre, making it an excellent location for the commuter. The M60 ring road offers excellent access to the north, south, east, and west of England, with Manchester Airport 5 miles away.

Altrincham Metrolink offers a direct link to Manchester Piccadilly. Altrincham town centre boasts numerous shops, both local and national chain stores providing an excellent range of products for the resident and visitor as well as a bustling indoor food market. 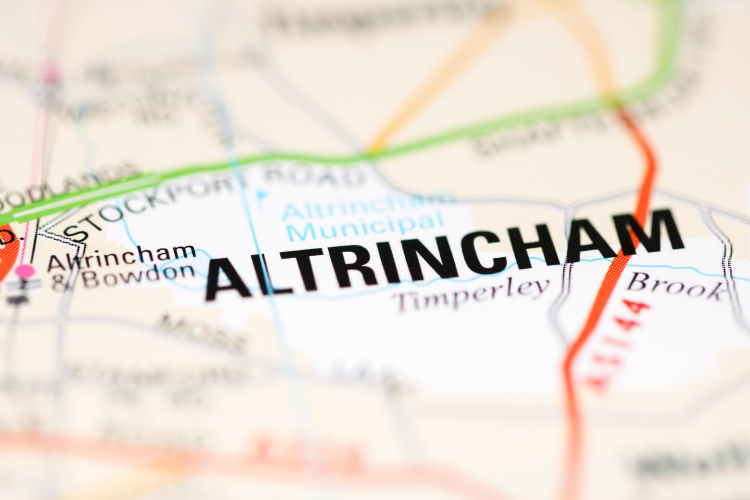 There is a superb range of both private and state schools, Altrincham Grammar School for Girls has been named the best state-funded secondary school in the ‘Real Schools Guide 2020’.  Whatever your sporting passion venues such as Altrincham Football Club, Manchester Storm Ice Rink, Manchester United, Manchester City, and Lancashire Country Cricket Ground to name a few are all within easy reach. The town is convenient for a short trip to the rolling Cheshire countryside which nestles alongside its outskirts. With country homes such as Dunham Massey and Tatton Park that are open to the public with golf courses and other recreational facilities nearby, Altrincham has adapted to satisfy the most demanding of residents. Altrincham was voted the ‘Best Place to live in England 2020 and 2021’ by The Times newspaper.

The close-by villages of Hale, Cheshire, Bowdon, and Hale Barns together are regarded as the wealthiest areas in Greater Manchester and outside of London, and similarly wealthy to Cheshire Golden Triangle towns Wilmslow, Alderley Edge, and Prestbury. These towns and the area between them contain some of the most expensive properties in the United Kingdom. Each village is known for its independent restaurants, golf courses, and excellent schools. A large percentage of the inhabitants work either Manchester City Centre or Manchester Airport.

Being a Cheshire landlord means keeping on top of the ever-changing legislative landscape. 2022 will see new l...

What's in store for the Cheshire property market in 2022?

Despite the COVID-19 pandemic, the Cheshire property market has remained competitive as ever throughout 2020 a...

How long do you plan to stay in your Cheshire home?

Buying a Cheshire home, whether for the first time or not, is a momentous occasion. There are a number of ques...

Your selected date & time is at